Budapest’s public transportation is already reasonably priced: A standard ticket costs only 350 forint (or, a little more than a dollar), and for my monthly student pass, I pay just 3.450 forint (about $12). Plus, kids under 6 ride free.

But it gets sweeter. These six fun rides are covered by a standard transit pass (sold in a variety of time periods, including daily and monthly), so you can ride any or all for no extra cost. (Alternately, with the exception of the ferry, they all can be ridden with a standard 350-forint ticket as well.) Talk about cheap entertainment!

Tram 2, which runs along the Danube River on the Pest side, is one of the 10 most beautiful tram lines in the world according to National Geographic.

There’s good reason for that. Not only does the line give riders an excellent view of the river, it also curves around the Hungarian Parliament Building, dives through a tunnel under the Chain Bridge and ends at Közvágóhíd station on the Danube Promenade.

Tram 2 plies the same route as the Danube Heritage tram that runs on weekends from May to September. Heritage vehicles require a special ticket, though.

Lit up at night, the Parliament Building is a must-see for visitors to Budapest. Why not take it in from the water on the no-added-cost Duna ferry?

Have you ever wanted to take a night cruise down the Danube? BKK lets you do it for free on weekdays, as long as you have a transit pass (single tickets are 750 forint). The passenger ferries that motor up and down the river are a standard part of the transportation system here, just like the metro, trams, buses and trolleys. The D lines, as they are called, criss-cross the river from Újpest in the north all the way down to Haller utca in the south.

On one winter night, we hopped on one at Jászai Mari tér and rode it down to Boráros tér, where we caught the 4-6 tram to head home. It’s worth noting, though, that we had intended to take the ferry only a couple of stops to Kossuth Lajos tér, where we were going to see the lighted Christmas tram, but we didn’t know how to tell the captain we wanted to get off. The boat just cruised right by the stop. Word to the wise: Learn the Hungarian for “We are getting off here” (“leszállunk itt”) and prepare to shout it if need be. At the time, we were being loudly serenaded by a group of drunken Hungarians, and we might not have been heard if we’d tried.

At any rate, the ferry is a lovely ride on the river, with amazing views of the Parliament Building on one side and the Buda Castle on the other.

Oh, and the city also runs a cable ferry simply to get people from one side of the river to the other. To combat the Danube’s currents, the D14 is connected to a cable so it can go, more or less, straight across the water.

Budapest is a tale of two halves. While Pest is flat and urban, Buda is decidedly less of both. It’s rippled by green hills, expansive estates (with yards, even!) and trees galore. These aren’t the mountains we were used to seeing in our former home in the volcanic Cascade Range, but they’re hills, they’re green, and they’re beautiful. A short ride on Tram 60, also known as the Cogwheel Railway, is a wonderful way to take it all in. The line starts down at Városmajor park, near Szent János Kórház, Buda’s big hospital, and churns uphill to Széchenyihegy, near the Gyermekvasút (Children’s Railway) and a host of hiking and biking trails (Tram 60, in fact, has a number of bike racks inside for those seeking two-wheeled adventure). 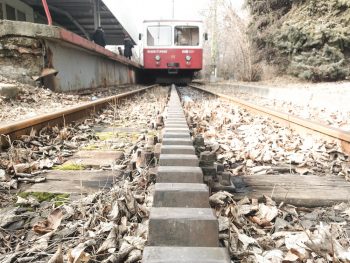 Due to its uphill climb, Tram 60 is powered by a large cogwheel that connects with a special toothed rail mounted on the ground, between the standard rails. As the cogwheel turns, it propels the tram forward.

Opened in 1874, Budapest’s cogwheel railway is the third oldest in the world, and it’s a fun adventure that, if you already have a BKK transportation pass, won’t cost you anything.

This one’s both useful and fun. While in other large cities (Madrid and Venice, for example) there’s a hefty surcharge for transit to the airport, in Budapest there is not. In fact, a trip to the airport usually entails a fun ride on the archaic Metro Line 3, with its rickety, rattly faded-blue cars that feel like a trip back in time. Look for the most picturesque train cars with the round ceiling lights and bench seats. Just quickly get clear of the doors because they close with a clang.

(If your goal actually is to reach the airport, then take the M3 to the end of the line at Kőbánya-Kispest. From there you’ll catch the 200E bus to Budapest Liszt Ferenc Airport. Here’s more info about transit to and from the airport.)

By the way, the cars on the M3 line are currently getting refurbished, so the old blue cars won’t be around much longer. Ride them while you can!

Line 1 of the metro system is the darling little Földalatti, or Underground, which traverses downtown from the Danube River to the far side of the Városliget, or City Park. It was built in the late 19th century, the first underground electric metro line in mainland Europe. Unlike your traditional subway lines, the M1 line was built from the top down. Workers dug a huge trench in the ground, placed the tracks, built the stations and then covered the whole thing up by a street, the famed Andrássy Avenue.

(Have you ever seen “The Shop Around the Corner,” the charming 1940 film starring Jimmy Stewart, on which “You’ve Got Mail” is based? The title shop was just “around the corner” from Andrássy Avenue.)

At any rate, what’s fascinating about the M1 line is that it is barely below the street above. And the cars are little, yellow and cute as heck.

For people who love public transportation, Budapest is a dream city. Mostly because the people who run the system here apparently love public transit as much as you do. They’re constantly running old cars on “nostalgia lines,” such as the tram cars from 1956 during the recent celebration of the Hungarian Revolution.

And every year at Christmas time, the city decks a handful of trams in Christmas lights and decorates a trolleybus with Christmas decorations (and even a live Santa in a seat in the back). The Christmas trams and buses move among several lines throughout the season, so it’s wise to check the BKK app for current locations. The special cars and buses are marked with a snowflake on the app. We use cookies to ensure that we give you the best experience on our website. Your continued use of this site constitutes your acceptance of our use of cookies.OK